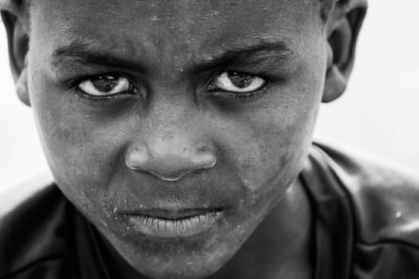 Who are you? Dafe blurted out.

Please boy, we are sorry we are in your place.

I am Ifeanyi and this is my wife Nneoma.

How did you end up here? Dafe continued his interrogation. Resisting to appear weak or needy.

He needed to lay a claim on his portion. No one would run him off his space in the forest, he thought.

‘We were robbed by bandits on our way to the village. We managed to escape with our lives’ the man responded.

Oh, I’m sorry to hear this! Dafe’s spoke feeling relieved. At least they weren’t spirits and neither have they come to claim his hut…

And your baby? pointing his little finger at Gozie, who was fast asleep on his father’s arm.

‘He fell during our escape. We are not sure if he is going to be well’, Ifeanyi continued.

‘Might you have some herbs for him?’ Dafe asked slowly moving towards his hut.

‘My mother always kept herbs for all sorts of ailments’.

‘I have some left for pains and fever. Although it’s bitter but they will do your baby much good’.

Ifeanyi and Nneoma both smiled at themselves, then turned to look at him.

Don’t worry it will make him sleep longer too. Dafe insisted trying to make them comfortable with his idea.

Or do you not like herbs? Dafe asked not sure why he got silence for a response.

Dafe went into his hut and brought a little greenish bottle. He poured some of the dark thick liquid onto the bottle cover and gave it to the baby’s mother.

Nneoma gently poured it into the baby’s mouth. It is better now while he is asleep, she said.

She heaved a sigh of relieve as she emptied the mixture into Gozie’s mouth. The baby took of it and moved his little mouth.

His mother gave a subtle smile.

Thank you, they both chorused.

Dafe returned to the hut to put back his little bottle.

Nneoma sat on the ground close to her husband. The grasses were low and soft twines weaving a mat around the little hut.

The night was cool and the fire did well to warm up the place.

They both sat with their backs to the entrance and gazing at the flames from the fire as small sparkles went up the sky..

We didn’t ask for his name, Nneoma whispered to her husband.

She looked around the hut. ‘No sign of his parents. Are we safe here? Ifeanyi’. She whispered again.

Ifeanyi spoke ever so confident. His approach to life always baffled his wife. But she has come to trust his sense of judgement.

Staring at his wife with a bold smile as she placed her right hand on his lap to support her head. Curling her feet in wards, she gained support for her tired body.

Ifeanyi knew worry was her weakness. The strangeness of Dafe, the lonely forest, Gozie’s fall, the attack earlier in the day were more than enough to quake her peace. Coupled with her given mistrust for strangers, it didn’t help her fears.

He touched her face a few times with his left hand brushing over her flying braids.

Meanwhile, Dafe spent some time in his hut.

Finally reappearing with his little lamp.

‘Sorry I left you. I fixed up the mattress. It’s not in good shape but you can make do with it until morning, I suppose’.

Dafe beheld the scene of the couple sitting peacefully. Their posture created a serene ambiance quickly bringing flashes of memories. These two must be very close like Papa and Mama, he thought.

Ifeanyi turned around. Sighting his lamp, not sure what to make of it.

‘Thank you for your kindness. My wife is drifting in and out of sleep already’.

She raised her head, yes, Ifeanyi, I’m up she responded.

Here have Gozie. Go in and rest ok? Nneoma looked up at him. Unsure of his decision, she tapped his leg.

Go to the hut and lay your head. Ifeanyi insisted not buying into her unfounded distrust for the little boy.

She took the baby gently from his arm and went in.

Dafe sat on the floor and stared at the fire.

So, what is your name?

Are you here alone?

Yes, sir. I lost both my parents.

I’m so sorry to hear that.

And have you no relatives?

Not quite sir..ehmm…not so…ehmm…a long story! Dafe finally got the right words and sighed.

Ifeanyi smiled at the lad’s slight confusion of tenses.

I’d love to hear all of it readjusting his seat to come closer to the boy. He placed his right hand under his chin and fastened his eyes on Dafe.

The brilliance of the flames made the boy’s face glow.

In a trembling and unsure voice, he muttered, all of it?

No one ever dared to ask for his story. They all assumed to know him. His heart pounded faster. Here comes a stranger in my hut who is willing to listen.

Dafe’s pondering was interrupted by Ifeanyi.

I have all the patience, child. Get on with it already.

12 thoughts on “The Golden Flute 6: The Guests”